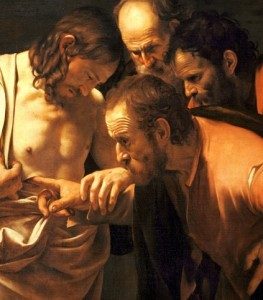 Dear friends in Christ:
The stunning detail at left from a painting by Caravaggio (1571-1610) shows St. Thomas the Apostle placing his fingers in the spear wound that was inflicted upon Jesus after he died (John 19:34). The evangelist says that when Jesus was stabbed in the side to make sure he was in fact dead, blood and water gushed out.
The incident is reported in the Gospel for this Sunday: John 21:19-31. The risen Christ appears to His disciples behind the locked doors of the upper room where presumably they had shared the Last Supper days before, though John doesn’t specify. John’s account is minimalist: “Later on that day, the disciples had gathered together, but, fearful of the Jews, had locked all the doors in the house. Jesus entered, stood among them, and said, ‘Peace to you.’ Then he showed them his hands and side.”
For reasons that are unclear Thomas was not with them and when Jesus first appeared to the disciples, who have now been commissioned to be apostles by Jesus with the words, “As the Father sent me so I send you.” Later, they told Thomas they had seen the risen Lord, but he refused to believe unless he could touch the wounds for himself. Eight days later the risen Christ returns and appears to Thomas and invites him to indeed see and touch the wounds. Thomas responds, “My Lord and my God!”
This Gospel episode has given us the familiar phrase “doubting Thomas” for someone who is skeptical about something. Rather than “doubting Thomas” I prefer the word “incredulous” for Thomas. It comes from the same word from whichwe get “credit,” which implies a relationship of trust. If a store allows you to buy something on credit it is because they trust that you will repay the debt. Thomas is incredulous. He doesn’t trust the good news he has heard from the other apostles. It is almost as if he said, “I don’t trust what you have told me. It’s just too good to be true.”
Is it? Is the Gospel of the risen Lord too good to be true in our own day, for us? There is good reason it might be. We live in a world in which little is credible. Recently the Whitehouse reported that a whole fleet of Navy vessels was on its way to the area around North Korea, including the aircraft carrier USS Carl Vinson. The next day the news reported the USS Carl Vinson was sailing in the opposite direction. What to believe, if anything? Fake news. Fake science. Fake people. In this environment skepticism seems to be the order of the day, and so we can identify with Thomas.
Maybe there is a bit of “doubting Thomas” in us all. The Good News is that the risen Lord met Thomas in the midst of his incredulity. This suggests to me that in times when my own spiritual life is burdened with questioning and doubting, I should not be dismayed. Rather I should reach out in prayer to say, “Lord I believe, help my unbelief.”
In Christ,
Pastor Joe Hughes
Voice & text: 217-898-9063 Email: j_w_hughes@hotmail.com

PASTOR JOE ANNOUNCES NEW CALL TO SHERIDAN, OREGON – HIS LAST SUNDAY AT SHEPHERD OF THE VALLEY WILL BE MAY 7

Dear Shepherd of the Valley members and friends:

Grace and peace to you from God the Father and our risen Lord Jesus Christ in the fellowship of the Holy Spirit! I pray that God has blessed you with a joyful celebration of the resurrection of our Lord. What joy it is to know that because He is risen we live forever in His presence.

I am writing you today to let you know that, after prayerful deliberation and consultation with brother pastors, our District President, and others, I have been led by the Holy Spirit to accept a new call to serve Trinity Lutheran Church in Sheridan, Oregon as its Intentional Interim Pastor. Last Wednesday, at its regular meeting of April 12, 2017, your Church Council was gracious in granting me a peaceful release from my duties at Shepherd of the Valley effective May 14, 2017. My last Sunday with you will be May 7, 2017.

I am most grateful that God has provided me the opportunity to serve you as your Intentional Interim Pastor these past twenty-two months. Even more, I am grateful for the kindness, prayers, and support I have received during this interim, and want you to know that I will miss you all.

As was shared by the Call Committee several months ago when they addressed the congregation, the training I have as a credentialed intentional interim pastor means that we, who serve in this capacity, are almost always in some stage of saying “hello,” and then bidding farewell to those we have come to know and love as brothers and sisters on the journey of the Christian life together. May God be gracious to us and bless us as we bid farewell and Godspeed to one another over the next several weeks.