Lutheran Church Corvallis, OR
Homepage > Stations of the Resurrection – III

III – Mary & Jesus in the Garden

P:
The Lord is in touch with those who seek his face, who honor his presence and abide in his love.
1
I am distraught and shaken by the violent separation that has taken you away from me, Lord Jesus. I have fallen into a deep pit of grief, away from your love. I’m now out of touch with God, with those around me, even with my own inner self. God help me.
2
Lord, your personal presence in my life was all-encompassing; now your absence is unreal. It hurts to weep; tears will not restore what I have lost. I struggle to find the motivation to go on with life. God help me.
3
Lord, you seek me and know me. My thoughts are not strange or repellent to you. My sins and indiscretions don’t put you off. You gather me in by your grace and hold onto me when I’m in trouble. You knew me before I knew you. You call me by name because I belong to you.
4
Lord, you stand before me. I now see with the clarity of faith the image of your salvation. You include me in the hope of life eternal and bless me with your tenderness and goodness. There is peace from your presence that resides in my soul.
P:
Glory and blessing be to God the Holy One, Creator of the universe, who in the power of the Holy Spirit, raised from the dead our Lord, Jesus Christ.

31What then shall we say to these things? If God is for us, who can be against us? 32He who did not spare his own Son but gave him up for us all, how will he not also with him graciously give us all things? 33Who shall bring any charge against God’s elect? It is God who justifies. 34Who is to condemn? Christ Jesus is the one who died—more than that, who was raised—who is at the right hand of God, who indeed is interceding for us. 35Who shall separate us from the love of Christ? Shall tribulation, or distress, or persecution, or famine, or nakedness, or danger, or sword? 36As it is written,

“For your sake we are being killed all the day long;
we are regarded as sheep to be slaughtered.”

37No, in all these things we are more than conquerors through him who loved us. 38For I am sure that neither death nor life, nor angels nor rulers, nor things present nor things to come, nor powers, 39nor height nor depth, nor anything else in all creation, will be able to separate us from the love of God in Christ Jesus our Lord.

10Then the disciples went back to their homes.

11But Mary stood weeping outside the tomb, and as she wept she stooped to look into the tomb. 12And she saw two angels in white, sitting where the body of Jesus had lain, one at the head and one at the feet. 13They said to her, “Woman, why are you weeping?” She said to them, “They have taken away my Lord, and I do not know where they have laid him.” 14Having said this, she turned around and saw Jesus standing, but she did not know that it was Jesus. 15Jesus said to her, “Woman, why are you weeping? Whom are you seeking?” Supposing him to be the gardener, she said to him, “Sir, if you have carried him away, tell me where you have laid him, and I will take him away.” 16Jesus said to her, “Mary.” She turned and said to him in Aramaic, “Rabboni!” (which means Teacher). 17Jesus said to her, “Do not cling to me, for I have not yet ascended to the Father; but go to my brothers and say to them, ‘I am ascending to my Father and your Father, to my God and your God.’” 18Mary Magdalene went and announced to the disciples, “I have seen the Lord”—and that he had said these things to her. 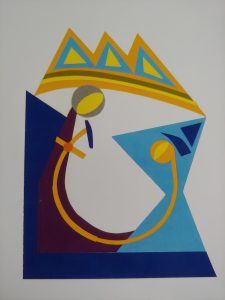 Mary Magdalene is named in all four gospels as the first witness of the empty tomb and the first preacher of the resurrection. In John’s gospel, the personal interactions of Jesus with select followers is intensified. Jesus, the “word made flesh,” explains the realities of heaven in dialogue (Greek: dia logos, “through the word”) with sight-challenged people. He begins with Andrews, Peter, Philip and Nathanael, meets Nicodemus at night, a Samaritan woman at Jacob’s well, an invalid at the Pool of Bethesda, teaches his disciples about the bread of life, heals a man born blind, visits the tomb of Lazarus, and even dialogues with Pilate about kingship and truth. After his resurrection, the dialogue continues with Mary, Thomas the doubter, and Peter, in need of restitution.

Mary, blinded by her grief and wondering where they have taken the body of Jesus, is brought to attention when Jesus calls her name. She is the only woman named in all four gospel narratives. According to Luke, Jesus had driven seven demons from her and she became one of a number of women who followed Jesus from Galilee, ministering to him. She was a witness at Jesus’ crucifixion and burial, and John wants us to see the connection between cross and glory through the story of her personal devotion. Mary simply wanted the corpse of Jesus returned; he once was “Lord” but now was dead and distant. She suffered loss.

When Mary looks into the tomb a second time (20:11) she sees “two angels in white, seated where Jesus’ body had been, one at the head and the other at the foot.” Rather than deliver instructions as in the synoptic gospels, they ask, “Woman, why are you weeping?” The scene depicted by John said it all: Mary, you are in the presence of the new ark of the covenant in the Holy of Holies (see Exodus 25:17-22 — the two angels are parallel to the two cherubim on the ‘atonement’ cover;’ between them over the ‘ark of the Testimony’ is the place where God promises, “I will meet with you and give you all my commands…”). So, why weep?

Now the crucified and risen Jesus is the place where God meets with his people, where heaven and earth connect in creative communion. Mary’s mistaking Jesus for the gardener is perhaps John’s way of connecting this scene with the Garden of Eden and suggesting the new creation. Mary’s mistake in clutching Jesus’ feet, holding onto the old physical and communal contact with the Lord, must give way to the ascending Jesus who will be one with the Father so that there can be oneness with all disciples of every age. Jesus, after all, is lifted up so that he can draw all people to himself (John 12:32).

5
The Christian faith is a religion of relationships. Nurtured in the deep care of Jesus’ love, we learn how to forgive, love, rejoice, practice patience and peace, kindness and goodness, freedom and self-control. We rely on the sanctifying power of the Spirit of Jesus to keep us on the path that leads to life.
6
It is the law of love that overcomes the law of righteous command, the deep baptism into the death of Jesus that satisfies the demand for correctness and perfection. Liberated by forgiveness, we return the fight to those who offend us. As Jesus sees our need and meets it, so we see the need in others and reach out with compassion.
7
Just as God gathers the solitary into families, so by resurrection power we are made members of the community of Jesus. Here is where the divine touch of a loving God can be evidenced among us. Here is where our name is spoken, our desires made known and forgiven, and all barriers to love and friendship come tumbling down. We are all brothers and sisters; there are no dominating fathers because we have one Father who is in heaven.
8
There is yet one command to keep–tell Jesus’ brothers in every generation that he is alive, that he goes before us into the future and pulls us along toward himself. Preach with power the resurrection of Christ, for without that event you are still in your sins and segregated from his community.

P:
O Lord God, lift our line of vision to embrace your gift of life. Let us not waste the gift you have given us but redeem it with purpose and promise. Help us to live for others as did our Lord, Jesus Christ, in whose name we pray. Amen.

A:
Mary Magdalene is a bit mysterious–a person shrouded in myth, tradition, and pious exaggeration. The Gnostic heresy made a great deal out of her depicting her as the domestic partner of Jesus who, after his death, lectures the disciples about the private conversations Jesus had with her. But she is not the dominatrix of the church nor is she the prostitute who anointed Jesus’ feet (see Luke 7:36-50). Sinner that she was, she is simply the first preacher of the resurrection. We stay in touch with Jesus through the word of his resurrection Share it. You don’t have to be ordained to do this.