Lutheran Church Corvallis, OR
Homepage > Stations of the Resurrection – VI

Stations of the Resurrection
VI – In the Upper Room with Thomas

P:
O taste and see the goodness of the Lord. Do not hold back but come into His presence with thanksgiving. Know this: the Creator God will not let His Holy One see corruption nor languish in the grave. He sets our feet on the path of life.
1
Sing an ever-new song: The Lord has turned his old creation upside down and now rules from the bottom up, exalting the lowly and gathering in the outcast.
2
The love of the Lord is sacrificial and eternal, a nourishing stream that will never dry up. The amount of the Lord’s love matches our deepest needs.
3
The Lord is patient with those who doubt his power, who shrink from the miraculous, not wanting to be hood-winked by wishful thinking. Take your time but set aside skepticism and fear of commitment. We are not the measure of all things. God is God, and in His presence, there is new life.
4
Touch and validate the wounds of the Savior. It is for our welfare that he joined the human race. Here is where trust is to be found–God is a suffering God, full of compassion and not weakened or easily offended by human treachery. He is no stranger to suffering but is acquainted with grief.
5
Rejoice, for blessed are those who have not seen the risen Christ but yet believe in him.
P:
Glory and blessing be to God the Holy One, Creator of the universe, who in the power of the Holy Spirit, raised from the dead our Lord, Jesus Christ.

3Blessed be the God and Father of our Lord Jesus Christ! According to his great mercy, he has caused us to be born again to a living hope through the resurrection of Jesus Christ from the dead, 4to an inheritance that is imperishable, undefiled, and unfading, kept in heaven for you, 5who by God’s power are being guarded through faith for a salvation ready to be revealed in the last time. 6In this you rejoice, though now for a little while, if necessary, you have been grieved by various trials, 7so that the tested genuineness of your faith—more precious than gold that perishes though it is tested by fire—may be found to result in praise and glory and honor at the revelation of Jesus Christ. 8Though you have not seen him, you love him. Though you do not now see him, you believe in him and rejoice with joy that is inexpressible and filled with glory, 9obtaining the outcome of your faith, the salvation of your souls.

26Eight days later, his disciples were inside again, and Thomas was with them. Although the doors were locked, Jesus came and stood among them and said, “Peace be with you.” 27Then he said to Thomas, “Put your finger here, and see my hands; and put out your hand, and place it in my side. Do not disbelieve, but believe.” 28Thomas answered him, “My Lord and my God!” 29Jesus said to him, “Have you believed because you have seen me? Blessed are those who have not seen and yet have believed.”

30Now Jesus did many other signs in the presence of the disciples, which are not written in this book; 31but these are written so that you may believe that Jesus is the Christ, the Son of God, and that by believing you may have life in his name. 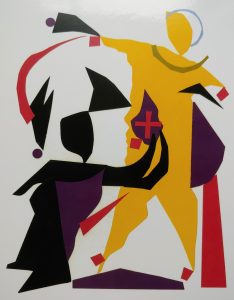 Thomas the Twin was dubious about the risen Christ. For him, seeing is believing, and Thomas was a holdout. While he is often remembered for doubting the word about the risen Jesus, he was also capable of courage. When Jesus received the message of Lazarus’ death, he resolved to return to Judea to “wake him up”—and this decision overrode the disciples’ caution. There were plots on Jesus’ life. Thomas simply said, “Let us also go that we may die with him” (John 11:16).

While Thomas, like Martha, can believe in a general resurrection, for him the question was whether by dying as a mortal, Jesus could be, in fact, the divine Son of God. Do gods change? Suffering and death entail drastic changes and gods by definition are apathetic (unchangeable, non-passioned Beings). Isn’t death and the role of Son of God mutually exclusive?

Thomas is overcome by the evidence of Jesus standing in front of him, inviting a probe of his wounded side. His response, “My Lord and my God!” affirms Jesus’ divinity with a typical Jewish phrase (“my Yahweh, my Elohim”—the holy name, Yahweh, was unspoken, with “Lord” as a substitute: the “LORD God” in English texts indicates that in the Hebrew text the tetragrammaton, YHWH, is used). Thomas’ confession would become very meaningful to persecuted Christians when Roman emperors, Nero and later Domitian, chose the title, “Lord and God” (Latin: ‘dominus et deus’).

Jesus adds a beatitude for the Church of later generations: “Blessed are those who have not seen and have yet believed!”

6
Lord, you overcome our doubts and fear, displacing uncertainty with the gift of faith. We trust you, Author of both the big bang and empty tomb. You know our names and write our DNA in your memory bank on the clouds.
7
We live with Thomas the Doubter inside our own very human selves. We are Thomas the Skeptic all over again. As we seek to test perception and verify our desperate hope, help us with Thomas to confess: “My Lord and my God!”
8
Break down the locked doors of fear, raise us up above uncertainty, and settle our irresolute spirits. You will have the last word, and it is “Life!” Eternal.

P:
O eternal God, with you there is hope for all ages. In raising your Son to life, you wonderfully display your true nature and intention for the whole universe. In your light, we see the light. You enjoin us within the community of saints, this great body of witnesses on earth and in heaven, to sing your praises. Alleluia! Alleluia! Alleluia! Amen!Amen.

A:
So sing! Carry the melodies of salvation around with you. Hum hymns, chant canticles, lip-sync chorales and imitate the heavenly chorus. Music is the human answer to the divine implosion of the risen Christ.