Lutheran Church Corvallis, OR
Homepage > Uncategorized > PASTOR’S POST – In the breaking of the bread…The real presence of the risen Christ – 3rd Sunday of Easter – April 30, 2017

PASTOR’S POST – In the breaking of the bread…The real presence of the risen Christ – 3rd Sunday of Easter – April 30, 2017 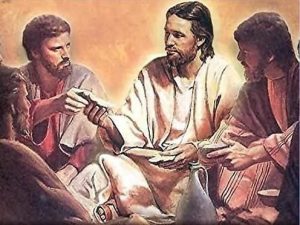 Grace and peace to you in the name of our risen Lord!
Christ is risen. He is risen indeed. Alleluia! These words begin and end our worship on each of the seven Sundays of Easter as an affirmation of the fact that Easter is not a day, it is a seven week long season that celebrates the resurrection of our Lord.
This Sunday marks the 3rd Sunday of Easter, and the focus is on one of the most unusual and yet important accounts of the risen Lord in the Bible, the “Walk to Emmaus” as found ONLY in the 24th chapter of the Gospel of Luke. Of all the Gospel passages that relate the appearances of the risen Lord to his apostles the “Walk to Emmaus,” provides Christians with an incomparable analogy for their lives.
The story begins on the same day the empty tomb was discovered. Luke tells us two of the disciples were on their way to Emmaus that day. It must have been a gloomy seven mile walk. Ironically the word “Emmaus,” the name of the village where they were headed, means, in Greek, “earnest longing.” That sort of captures the mood.
Suddenly someone they do not recognize joins them on the way. He asks what they were talking about. With that, their sorrow spills out. They had hoped that Jesus was the one to bring redemption to Israel. But things went very wrong.  The shadow of the cross loomed large in their minds, even though the terrible day was now three days past. “We had hoped…” they say. But their hopes ended in disappointment. So much of life is that way, ending in disappointment. New opportunities fizzle. Relationships go bad. Successes we enjoy turn out to be more complicated and difficult than we had imagined.
Then a wonderful conversation takes place in which the stranger, still unknown to them, teaches them (and us as readers) the meaning of the Hebrew Scriptures (our Old Testament) concerning the Christ, and how all that God has said has pointed to this very moment in human history.
When they come near to their destination, and the stranger attempts to move on, that they ask Him to “stay with us.” He agrees, and as they share the simple meal something amazing occurs. Luke writes, “When he was at table with them, he took the bread and blessed and broke it and gave it to them.  And their eyes were opened, and they recognized him. And he vanished from their sight.”
What happened next? The two leave immediately, despite their fatigue and the late hour, and make their way the seven miles back to Jerusalem to share the Good News, only to discover that the joy of the resurrection is already being celebrated. Luke concludes, “Then they told what had happened on the road, and how he was known to them in the breaking of the bread.”
As Lutheran Christians we are not unlike these two disciples. We don’t pretend “everything will be alright” when we are in pain or grieving a loss. Rather, we have confidence that Jesus also will meet us in our sorrows and struggles in life.
But we have also this: that Jesus also reveals Himself to us in “the breaking of the bread.” Lutherans, of all Protestant Christians, are often the exception in this. With the rise of so called non-denominational churches and evangelicalism, a split that really began back in Luther’s own time,  some seem to forget that Jesus did say “this is my body…this is my blood” of the bread and wine we share at Holy Communion.  Luther, and we who call ourselves after his name, are fundamentally sacramental. We teach and confess that Christ Himself comes to us in the bread and wine of Holy Communion without any merit or worthiness on our part.
Christ is not present at Holy Communion because we believe it, but because He Himself has promised it. That is an important lesson from this Sunday’s Gospel. Jesus wasn’t present with the disciples because they believed He was, but because He loved them and came to them in their sorrow. Lutheran Christians uphold the “real presence” of Christ in the Sacrament in the glad confidence that whatever our emotional state, whatever our sins and failings, Christ comes to us because He Himself promised in His Holy Supper.
This is a great treasure of the Lutheran faith. It is something for which Martin Luther was willing to “go to the mat” as they say. For all his bluster about the Bible and how it the sole authority for the faith and life of the church, Luther understood that Christians celebrated Holy Communion before there was a Bible, and certainly before it was widely available to be read. He never relinquished the truth that in Holy Communion Jesus really is there – risen as He said. It’s not just a ritual, and it’s not just bread and wine – it’s the body and blood of Christ!
So it was in the breaking of the bread at the supper that the disciples finally realized who was with them. May it be that we all realize who is with us in our journeys: the crucified and risen One!

Christ is risen. He is risen indeed. Alleluia. 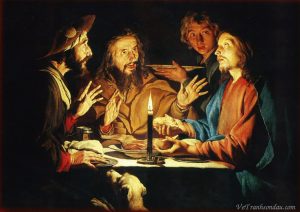