Pastor’s Post for the week of Sunday, October 23rd – In Christ Alone

Grace and peace to you and yours from God, Father, Son, and Holy Spirit!

For over 2000 years orthodox Christians have affirmed the principle of “Solus Christus” or “Christ alone.” The Reformation period, 500 years ago, was a time when the reformers like Martin Luther believed they were called upon to make this confession anew.

This was primarily because of the medieval Roman Catholic understanding of “penance.” This was the idea that in order for God’s forgiveness to be effective in the life of the repenting person that person had to do something to show they were serious, some good work, some kind of amends. Even though the words of forgiveness (absolution) may have been pronounced by the priest or pastor, that forgiveness was a “conditional forgiveness” because it depended on the Christian then following up and doing something to make it good.  After all what would you do and how would you know when you have done enough?

While it might make sense for us to understand forgiveness this conditional way, Luther and the reformers rejected it for a couple of reasons. One is that nowhere in Scripture does God tell us that when we confess our sins to Him the forgiveness He offers will only be good if we do something else.  The Gospel for this Sunday from Luke18 makes this point unequivocally. Two men go into the temple to pray. One thanks God for being a devout person. The other stands far off in the distance and says simply, “God, be merciful to me a sinner.” Jesus says that the man who sought God’s mercy went home justified (Luke 18:14). No contingencies. Nothing more to be done. He is forgiven.

What is more to the point, if all the forgiveness we receive from God is conditioned upon us doing something more, then we are actually saying that what Jesus did for us on the cross, just wasn’t enough! His rejection, humiliation, torture, suffering and death his death were all insufficient for full and free forgiveness. Does a believer rally think that Jesus didn’t suffer enough on the cross, or die enough for the forgiveness of my sins?

Certainly it is true that we ask that God change our hearts, realizing that we have hurt others or failed to be faithful to God. But that is not a condition of God’s free and full forgiveness of sins. 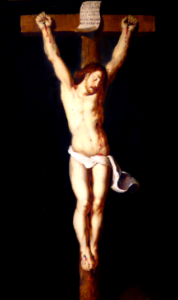 Imagine you go to worship one Sunday and that pastor announces the Absolution by saying something like, “I forgive you all your sins, provided that you go and make amends to all the people against whom you have sinned.”  It certainly may be true that the forgiveness I give to people can be contingent. But that is the difference between you and me, and the God who loves us, forgives us, and calls us to live in the joy and freedom of the Gospel. God forgives unconditionally! Not so much for people.

Such forgiveness is possible only because of Jesus Christ. That is why Lutherans and all faithful Christians affirm the Solus Christus. As the song we’ll sing Sunday reminds us, “In Christ alone my hope is found.”

Southern Baptist scholar Stephen J. Wellum has written a nice summary of how the “solas” we have been discussing all fit together: “The word spoken by God, the faith given by God, the grace extended by God, and the glory possessed and promised Solus Christus cannot make sense apart from the divine Son who assumed our humanity for our salvation. Five centuries later it is indeed still all about Jesus!

PS.. you can read Wellum’s article, Solus Christus: What the Reformers Taught and Why It Still Matters on the web. Here is the link: http://www.sbts.edu/wp-content/uploads/sites/5/2016/05/Solus-Christus-What-the-Reformers-Taught-and-Why-it-Still-Matters.pdf