Lutheran Church Corvallis, OR
Homepage > Uncategorized > Pastor’s Post for the week of April 9, 2017 – Jesus: below expectations? 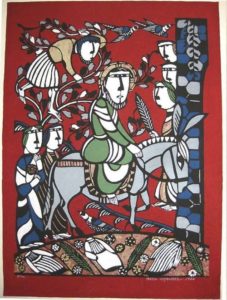 Dear friends in Christ:
For the past five weeks I have be saying that we are on a journey “toward the decisive events of Holy Week.” Well, this is it. We are there. This is Palm Sunday, the Sunday of the Passion, a day that recalls the triumphal entry of Jesus into the holy city of Jerusalem, and the one Sunday in the church year that I can honestly invite you to church and say that you won’t have to listen to a sermon.
We’ll hear the story from the 12th chapter of John’s Gospel. Soon after Jesus raises Lazarus from the dead the crowds he has attracted gather for a triumphal procession of the returning king to the royal city. Their minds are full of visions of King David and the great kings of the Old Testament who processed into the city with the victorious armies – some times. The people lay their robes on the ground to create a make shift red carpet. The wave palm branches in the air to welcome the king.

But wait! Something is very different about this returning king. He is Jesus of Nazareth, a humble carpenter. He has nevertheless performed great signs: water into wine, cross social boundaries to reveal his true identity to a Samaritan woman at a well, giving sight to a man born blind, and then raising the dead man Lazarus who had been in the tomb four days.
He isn’t mounted on a powerful stallion, and is not wielding a mighty sword. He has not come to slay the enemy, but to call us to love our enemies and to “turn the other cheek.” He has come riding on a burrow, humble, and his weapon of war is the Word of God. Yes, this Jesus is a different sort of king than the people of Israel have ever seen.

And soon the triumphant shouts of Hosanna are muted. This isn’t turning out the way they had hoped. Jesus is not meeting expectations. And without too much encouragement their shouts of “Hosanna” become cries for death: “Crucify him!” As I said you won’t have to listen to a sermon about this. This Sunday the church lets the Gospel writers speak for themselves. We will hear the story of the Passion according to St. Matthew in full read from a contemporary version of the Bible called “The Message” by Eugene Peterson.

During the years I worked for the university as “Director of Gift Development” (fund raiser) I sat through a number of annual reviews of my performance. There were three possible evaluations: “above expectations,” “meets expectations,” and “below expectations.” Most of us who have worked in the “real world” have sat through similar performance reviews. Sometimes they are difficult.
If the people of Jerusalem, from the chief priests, to the humblest beggars on the streets, were to evaluate Jesus’ performance, I suppose they would have said that he performed “below expectations.” When he is nailed to the cross because of this some even say, “He saved others, let him save himself, if he is the Christ the Son of God!” How those words must have stung our Lord as he was hanging their pouring out his very life blood in utter anguish for the sin of the world.

Because of our sinful nature people still want a god who will perform according to their expectations. Those who reject the church and the Christian faith see may Jesus as a failure. Who needs a savior who gets himself crucified?

But rejecting the Gospel only makes sense if you have made yourself your own god, and believe you owe no one anything. There really is no such thing as an atheist. Either God is God, or you have come to believe in something or someone else, which the Bible calls idolatry.

The Bible teaches us that every human being was created to honor and love the God who first loved us, and to love our neighbor as ourselves. May God use the passion story of Jesus’ suffering death and resurrection to give new sight and new life to everyone that we may at last embrace Jesus is our King. 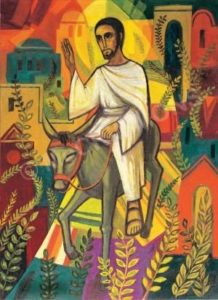