I have been thinking a lot About the Parable of the Good Samaritan in light of some of the tragic events we have experienced these past few days.

When a legalist stood up to test Jesus about the meaning of the word “neighbor” in Luke 10:25-37 most of us probably come to the conclusion that, in telling the Parable of the Good Samaritan,  what Jesus wanted was for this “know it all” to realize that his sphere of compassion was too narrow. He defined as neighbor people who were close at hand, people who were like him in some way. He never thought that someone so different as a Samaritan, a person who by ethnicity and religion was considered an infidel, an enemy of God, and a traitor to the God of Israel, could actually prove to be neighbor, but of course that is exactly what happens in the parable.

There is no question that widening our sphere of compassion is a good thing for Christian people to do. But the discussion about neighbors, and who is and who isn’t, was to this legalist’s mind all a matter of theory and theological chatter. Notice how the episode ends: Jesus says, “You, go and do likewise.”  In a sense Jesus is saying, “Enough of your bantering…go and do what you talk about, then you will truly have life!” But to do that requires exactly what Jesus says, “to deny oneself and take up the cross and follow Him,” and who among us is really ready to do that? 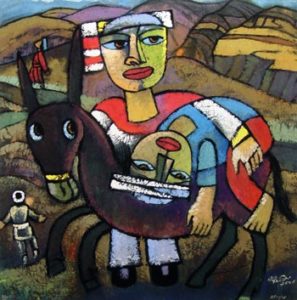 Here Jesus points us to a real problem with being religious. I think the evil one sometimes hijacks Christians to see their faith as a matter of ideas and principles to be discussed instead of a life to be lived in a certain way. For true disciples of Jesus, faith is a matter of what we do, not idle theological chatter.  James wrote in his epistle, “I by my works will show you my faith.” (James 2:18)

For example, yesterday as I was watching the our denomination’s convention proceedings live streaming from Milwaukee, Wisconsin I watched as an older woman spoke persuasively against a resolution to discourage LCMS congregations from having women assisting with serving Holy Communion that was before the convention for a vote.

Sadly the convention voted in favor of the resolution. Fortunately, in our denomination synodical resolutions are merely advisory and every congregation of the synod is free to decide its own life and practice.  But what really disappointed me was how the convention acted in a way that totally disregarded this lovely woman’s obvious passion and love for her church and her Lord.  What a sad moment for our denomination.  One LCMS pastor said, “I am embarrassed to be Missouri.”

Thankfully, though, we do not “believe” in the LCMS. As we confess in the creeds, we believe (put our faith and trust in) in the one holy Christian (catholic/universal) church, the baptized community of all believers in Christ which is destined by grace to share in the joy of God’s love forever.  The church to which we belong ismuch bigger than any denomination. However well-reasoned the resolution before the synod was yesterday, to my way of thinking its action was less than neighborly to the faithful woman who spoke against it.  Our elders will be leading a discussion of the question of expanding the number of people who can assist in serving communion in our church at your voters’ assembly meeting July 31.

That we live in a world full of hate-fueled violence was evidenced by the tragic events in which police killed two African American men, one in Baton Rouge, and one in Minnesota, and then the next day a deranged man with a weapon, a man trained to be a killer by our own military, turned the weapon on citizens and police who were peacefully protesting the carnage, killing five police officers and wounding seven others until he himself was killed.

Contrast this with the Christian’s call to follow Jesus, and live lives that value all people as made in the image of God. But to be true disciples in deed and not just word, one needs to be ready to give up the self.

This is hard for us. Everything in our world teaches us that the self is more important than anything.  The legalist in the parable was more interested in himself and in being neighbor to anyone. His question is only about him proving himself to be right. Luke says he was trying to justify himself.

But Jesus does the exact opposite. He “emptied Himself,” that He might give Himself for the life of the world. Christians are called to follow Christ in this way of life. St. Paul put it this way in his epistle to the early Christians at Philippi:

Do nothing from selfish ambition or conceit, but in humility count others more significant than yourselves.  Let each of you look not only to his own interests, but also to the interests of others. Have this mind among yourselves, which is yours in Christ Jesus, who, though he was in the form of God, did not count equality with God a thing to be grasped, but emptied himself, by taking the form of a servant, being born in the likeness of men. And being found in human form, he humbled himself by becoming obedient to the point of death, even death on a cross. Therefore God has highly exalted him and bestowed on him the name that is above every name, so that at the name of Jesus every knee should bow, in heaven and on earth and under the earth,  and every tongue confess that Jesus Christ is Lord, to the glory of God the Father.  (Philippians 2:3-10)

There is only one who lived a life free to self-justifying behaviors and words, and that is Jesus Christ, the Son of God. This is what we mean by saying that Jesus is the sinless Son of God. He is sinless in that He gave up Himself, allowed Himself to suffer, be rejected, and tortured to death. Jesus refused to ever put Himself first. Not one of us can say the same.

Thanks be to God for sending Jesus who gave Himself for us, and calls us to follow Him.

Image above: “The Good Samaritan” by artist He Qi